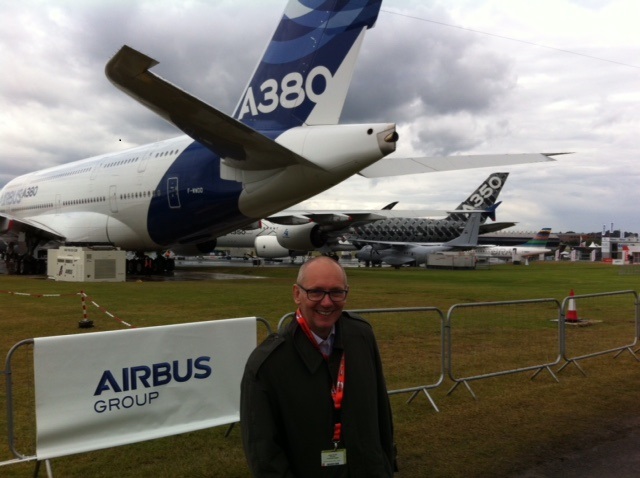 Well all work would be very dull, wouldn’t it? The biennial Farnborough Airshow is the shop window of the aerospace world. The trade days at the show are an opportunity for suppliers to the sector to exhibit their wares and to mingle with buyers from the civil and military spheres. It is strange indeed to walk through the display halls to find ejector seat technologies vying for space with passenger airlines, and environmental sustainability operations sited cheek-by-jowl with munitions suppliers.

Firebrand were part of the trade show this year, combining client meetings and networking with some hard-core plane-spotting. And boy, did we need those anoraks for some major thunderstorms!

This year’s flying programme comprised mega presentations of hardware from industry giants; Airbus and Boeing, and some thunderous displays of fast-jet heavy metal from the contenders for NATO’s air-superiority role.

Warm in their air conditioned cockpits, the display pilots were untroubled by the fierce rain-showers that made show viewing a soggy experience. During one particularly fierce downpour, your correspondents sought refuge in the sales-pavilion of Viking, the organisation that has bought the rights to manufacture the DHC Twin Otter – twenty years after the production line shut down. Nobody has yet produced a more versatile airframe. We can report that their hospitality is as warm as their sales prospects. We felt obliged to buy three. Well with the oil price where it is…

Firebrand continues to work with carriers, manufacturers, airport-operators and ancillary organisations across the aerospace world.